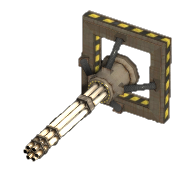 Players start out with a 8.0 Cal Gatling Gun.

Weapons are a module type in Lightspeed Frontier. They require electricity to operate. A necessity for any ship, they can be used against other ships or for asteroid mining.

The inventory filter for them is the following:

All weapons have a firing group assigned. The default group is Manual 1. All 3 firing groups are toggleable on and off from the hotbar. Weapons assigned to Secondary Battery will aim and shoot automatically if that firing group is enabled and a target is locked onto .